Pre-Production for Big Brother 2012 started for the House Directors on 14th May. Of course many other people never left the site when the Celebrity version finished on January 27th. In fact, the Task Team had two weeks off and were right back in again. But for the Directors who were just starting back again, the first two weeks consisted mainly of training new staff and ironing out potential issues and problems with the camera positions and the new design. The Big Brother House gets a makeover every series, with sections ripped out and new features installed. Old items are taken out and new items put in. And every season it gets bigger and better. But it does mean the Directors need to start fresh with installing enough cameras in the right place to capture all the action.

It’s a real buzz to walk around the camera-runs during the new build and see an army of designers and fitters laying new carpets, applying wall prints, testing lighting, installing furniture, installing hot-head cameras, new windows go in, one-way mirroring applied, etc. Every day sees something new come to life. It’s great to see the camera stack come ‘on-line’ one camera at a time. At the beginning of the contract the Reality Gallery monitors looked like this: 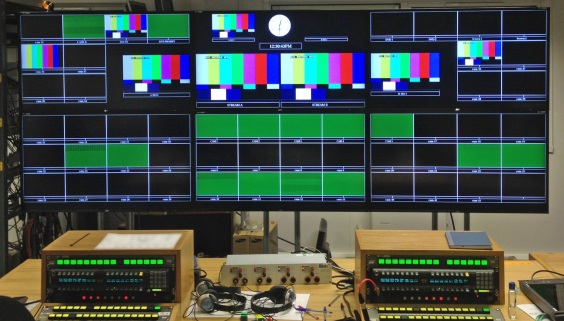 As you can see no cameras were up so there wasn’t much for us to work with! Installing everything takes a long time and there are miles and miles of fixed microphone and camera cables to install and test. The hot-head cameras aren’t permanently up inside the House. They travel around the world to be used on other television projects (The F1 racing, for example). Once they are fixed inside the House they are adjusted to make sure they are straight and balanced. During the run it’s common for a House Director to state the infamous words “Camera 13 is on the piss”. And once we’re on-air you can’t just walk into the house with a spirit level and a screw driver to fix it. They are either sneakily fixed through the night whilst the housmates are asleep or during the day whilst the contestants are locked down in another area of the house or on a Task. Clearly this is an inconvenience so getting it right before transmission is vital.

By the beginning of week two most of the cameras were up and we were able to do some training. It’s traditional for new staff to go in as test Housemates and spend a few hours roaming around whilst the Directors follow them and carry out further camera adjustments. It’s customary that the Loggers (the people who type up and timecode everything they see and hear 24/7) and the Runners (the ones who make the teas and coffees and do a lot of work that others can’t/won’t do) be the subjects for these tests. They sit down in the lounge area, we cover it. They try out the beds, we cover it. They roam around the garden, we cover it. It’s a good one-day test.

A week or so before the Live Launch show there is a full dress rehearsal with actual contestants who have applied for the show. It’s called Guinea Pigs, and lasts anywhere between two and five days. This run-through also happens on other reality shows such as ‘I’m A Celebrity’. It gives the Producers a chance to see the House in action, allows the Editors to cut together ideas they want to use for the series and allows the Task Team to see how some of their ideas will play out. More importantly for the Directors, it allows us to see what sections of the House need more coverage by moving and adding cameras.

By the end of week two, the 2012 Guinea Pig rehearsals were coming to an end (just as I was beginning to learn their names!). To add to my adrenalin levels, on the last day the Production team had a deliberate fire alarm activation to see how the crew would handle it. We did pretty well, following the procedures set out by Health And Safety. You can imagine my horror as I watched the housemates disappear from camera coverage through a fire door from the garden and into the camera runs, quickly apprehended by the Security team and escorted to a safe house. I could hear them but not see them. Such a horrible feeling!

Last minute changes are made in the final days before Launch. Where things haven’t worked out they are adjusted, removed or replaced. New boards go down in the camera runs to stop any squeaky floorboards that have developed during the set-up. Black drapes are put over every mirrored window in the camera runs so the Housemates can’t see a thing, even if they press their faces right up against the glass (which is a rule break, according to the Big Brother Housemate Welcome Pack). With minutes to go before Launch there are still people in the house making final adjustments. Just as Brian is recording his “in thirty minutes” and “in fifteen minutes!” teases, the Gallery crew are handed laminated sheets with Housemates photos and names on. This is the first time we get to see who the contestants are. Contrary to popular belief, 95% of people working on the show do not know anything about the Housemates before Launch day. The Producers are extremely good at keeping secrets and using code words.

If you haven’t seen the teaser trailer, here it is: