Day one on Symi was a waste, to say the least. I could have made better use of the hours left in the day other than falling asleep. Arriving at 9.30am and sleeping the entire day is worth a slap in the face. It’s fair to say half a days worth of traversing the skies above the Balearic and Aegean seas before sailing the Dodecanese islands would take it out of you.

Still, a waste is a waste.

Day two began with a startled awakening. I did that thing where you sit up with your eyes open wide and your brain has no idea where you are. It took a few seconds to realise that the heat and bright sunshine streaming through the window meant I certainly wasn’t in the UK. Ian, who met me at the dock (not a euphemism), mentioned a walking tour on Tuesday morning, and it made sense for me to spend some time learning about the place I’d be staying for the next two weeks. So off I went to the meeting place.

What immediately struck me when I left the apartment was that I had no idea where I was. Arriving was such a blur and I  remembered very little between getting off the catamaran and falling asleep in the apartment. I could have literally been anywhere on this island. I started walking, vaguely remembering the various stairways and turnings between the apartment and the main street. Before long I was surrounded by… cats. Lots of them. Dozens in fact, like little furry hoodies. They had ASBO written all over them, purring deeply and pacing with one paw crossing the other as they paraded in a circle like a scene from some musical. One-eyed kittens stared at me with anger on their faces… 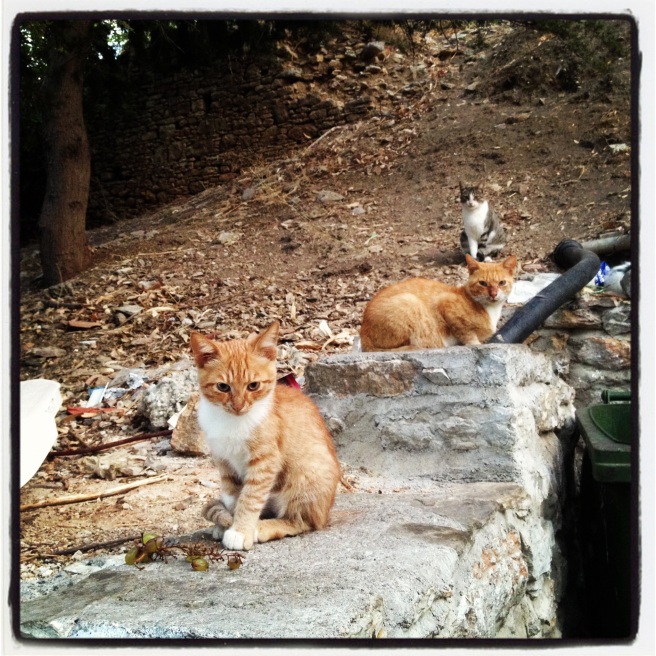 As cute as they can be, it was pretty clear these were wild cats. And potential monsters. There are signs dotted everywhere in both Greek and English asking people not to feed the cats. No wonder they look pissed off.

My timing appeared impeccable as I spotted Ian at the end of the street in front of me towards the meeting point. He was chatting to Neil from Symi Dream, who invited me to their last meet-and-greet wine session (free!) on Sunday. Something I added to my to-do list.

I was expecting a group of camera-clad tourists to be at the meeting point already, but there wasn’t. Just two other people bothered turning up. During Ian’s walk we discussed architecture on the island and the reasons for it. We touched upon the water supply, which is either imported via water boats or via the desalination plant. Water capacity on the island is less than 50% of what it can be, so using it sparingly is advised. The water boats which top-up the local tanks come and go less frequently than in the past thanks to the single desalination unit that still works on the island. The other unit, german built, exploded and burned to the ground a few years back allegedly due to “lack of servicing or improper use by locals”.

Ian mentioned the helipad which sticks out like a military sore thumb upon the mountainous region. If you’re seriously ill or injured the ambulance (not ‘an‘ ambulance, ‘the‘ ambulance) will whisk you up to the pad and await extraction to Rhodes. The helipad ‘fact’ is connected to the water supply ‘fact’ in this way: the helicopter used to land in a peculiar place, right down by the dock on the only wide section of road. It was a tight squeeze between the police station and the clock tower, but they managed it with precision (like our air ambulances do in the UK). Occasionally they still land there, depending on the injury of the person and whether the trip in a shoddy ambulance up a steep incline through mountainous terrain to the helipad is a good idea or not. Ian tells us that one fateful morning a lady with a potential neck injury was to be air lifted from the dock rather than the helipad. But the water boat arrived in it’s speedy fashion, and without thinking twice about their normal procedures steered towards the dock and ploughing straight into the perched chopper, sheering off it’s tail. Whether this is true or not is unknown.

But back to the water situation. Because it’s interesting. Water is stored in large containers somewhere in or around each dwelling. It’s pumped locally via electric pumps from your tank through your taps or shower. This brings us neatly to the loo situation. And it is a situation. In Greece you don’t flush loo paper down the pan. Oh no. You complete your actions and pop your used items into a bin. It’s an odd thing to get used to but it’s done this way, yet again, because of the water supply. I’ve read elsewhere that locals do it this way as the sewage system gets blocked due to narrow drains. But Ian gave us another reason: Papier-mâché. Waste from the loo, or black water as it’s known, ferments the local trees and gardens. Yes, you read that right. Another area built somewhere locally to each dwelling contains all your unmentionables which eventually liquify and penetrate a single drywall in the structure which then feeds the trees and plants leading downhill. Loo paper doesn’t biodegrade and blocks the drywall, stopping the process.

Here’s my chance to state why greek wine tastes like shit.

The walk continued uphill through the long narrow lanes of the old ancient town where hand-chiseled stone buildings lay in ruin, waiting for owners through some miracle. Property ownership is a big thing in Greece, and if someone comes forward with documentation suggesting long lost relatives of Symi own a building, it is handed over to them. Ruins lay in complete disrepair, sometimes surrounded by beautifully bright renovated homes. And that’s just the way it is.

Symi has very much an unorthodox Christian following. With a population of only 2’500 (90% less than during the war) it seems incredible to have so many monasteries, churches and chapels. There are purportedly over 300. And on our walk we visited at least four or the larger ones, one of which is perched high up overlooking everyhwhere else on the island. 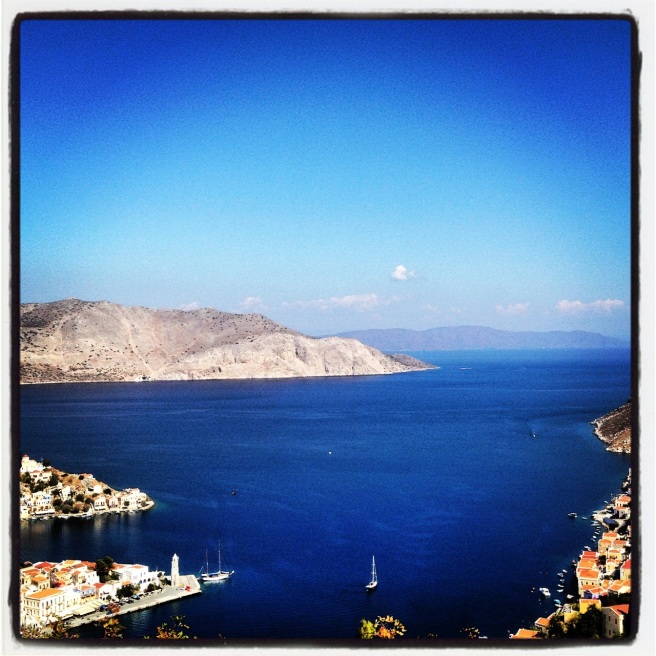 This is the view I had seen online from previous visitors, though they didn’t mention they had walked for hours and were actually on the grounds of a church when they snapped their version.

We had started our walk-and-talk just after 9am. Four hours later we had reached the end, somewhere high up the terrain. Meaning it was literally all down hill from there. I expected to be coated in sweat with aching legs but it wasn’t nearly as bad as I had thought. Back at the meeting point we said our goodbyes and I headed downwards into the town, where from high up appeared to be the heart and soul of Symi. Various tourist couples and families pottered around the sponge shops occasionally hopping on and off anchored yachts. Some clearly from the UK, others spoke German and Dutch.

What struck me about the harbour is just how clear the waters are. And I literally mean crystal clear. I’ve never seen anything like it, with the bobbing hulls of boats and yachts clearly visible, with shoals of tiny blue fish mingling around the surface.

Previously I mentioned the walk and how my legs and body were ‘okay’ with it. This is where things go wrong. The walk back to the apartment was via the Kali Strata, translated means “the good way/route/steps”. Hundreds of steps. Coming down was fine. Going back up in direct sunlight was not. Several times I had to stop and sit in shadow, attempting to catch my breath. When I eventually recognised the route back, several hundred steps on, I was in dire straits marching into the first available shop and grabbing bottles of water from their fridge. I think the owners were slightly startled by my demeanour, something I hope to resolve when I deliberately go back there for breakfast!

Although technically this was day two, I’m counting this as my day one. Knowing I had plenty of time left, I didn’t take out my big camera nor was I in a hurry to take photos. I merely snapped away instagram images on my iPhone for the purposes of FaceBook (probably clocking up massive data costs for when I get home).

On Wednesday, the photography starts.