In brief: there was an island wide power cut, I set up more time lapse shots, took more infrared pics, spent the evening by the old windmill ruins and discovered geocaching on Symi…

It appeared my “reset day” yesterday didn’t work. I slept late, yet again. It wasn’t too much of an issue. At 5.15am the glowing street lamps dipped for a second before burning bright again. A few seconds later the same thing happened. And like some scene aboard Titanic, where the electricians struggle to the last second to keep the ship alive, the power gave way and the whole island was plunged into darkness. It was also eerily silent. It’s funny how everyday noises like the fridge and freezer or air conditioning units hum and buzz in the background and they blend into our surroundings. There truly was no sound at all. Anywhere.

Knowing that the power was off for everyone else, I decided against an early trip into the town for breakfast. Nobody would be open anyway. Initially I had my alarm set for 5am, hoping that with a little cloud around there would be a chance of a spectacular sunrise. I had dreamt of fluffy clouds of salmon and gold giving way to streaks of dreams across the skies. But having checked the forecast across several sites, it wasn’t to be. Clear skies and highs of 28 degrees. The sky basically turned from black to dark blue to bright blue. Any sunrise is still a beauty to witness, but I had hoped for added character.

Thankfully my camera battery was recharged already, having run it completely empty on Sunday. My evening routine seemed to pay off; copy all images to the laptop, clear the memory card, recharge the battery, stuff day pack with lenses, refill water bottles and put the tripod by the door. This set-up means I can just grab-and-go in the morning.

Without much thought I marched up towards some of the old ruins for some time lapse shots. I made a mistake during the set up, leaving the cameras auto focus switched on. This meant that every now and then during the time lapse video that was eventually compiled, the video would jump as the lens refocussed on each image. Amateur mistake. And during the first run a small kid appeared walking a dog. I gave a “yassou” greeting, a way of saying hello (I’d learned the right way, since discovering yesterday that the “calimera” word I was using meant “good morning”, and I’d been saying it at all times of the day, like a buffoon). My accent must have been good as the kid tried to talk to me. He seemed interested in photography and what I was doing. All I could really do was try gestures, pointing and gesticulating. He didn’t speak english, and politely smiled before being led around the corner by his dog, vanishing out of sight.

I applaud his efforts in attempting to communicate. Something I wish I could have said to him in Greek personally. I’ve said it before, and I’ll say it again: I should have really learnt some basic language. It would have allowed for better interactions. In the end I was swayed toward not using any of these shots for a time lapse due to the focus issue and the fact that a boy, a dog, a homeless man and a family had walked through the scene at various times throughout the exposures. Still, I got through two chapters in my book.

By 1.30pm the power was back on, just as I reached The Olive Tree. Perfect timing. Janine and Tina were just sorting out the kitchen and I pondered on the idea of an unplanned lunch. Baked potato with tuna and mayonnaise with a ham salad. It went down a treat. Apart from being bombarded by curious wasps (yet another insect I’m not keen on). They even forced me to swap tables!

Sitting down and chatting with a few ex-pats also gave me the directions to the old ruins high up on the hill I’d seen from various viewpoints. With a time lapse in mind, off I went towards the ancient windmill ruins. 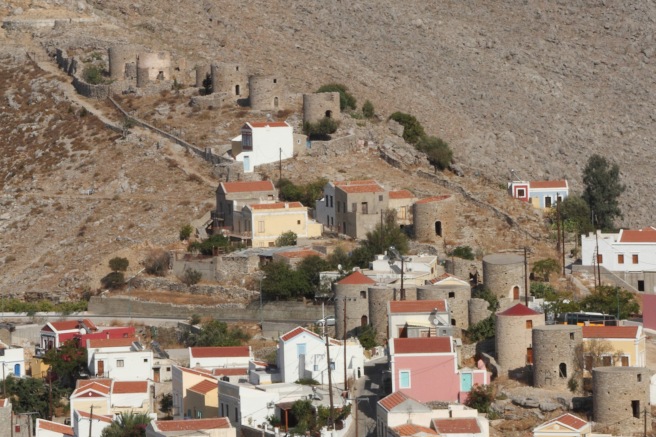 It was the hottest day I’d witnessed so far. I had been sweating since leaving the apartment, and it didn’t stop all day. Walking through those delicate alleyways and up dozens of stone steps, I really was putting my body through it’s paces in the heat. Packing two water bottles was a smart idea. If only I had stashed some food too.

Up by the old windmills it appeared fenced off. The folks I spoke to said there was a black gate that just slides open. They were right, and I didn’t see any signs telling me not to go in. Others had climbed sections of wall to get inside the windmill compound, leaving small rockslides behind. I didn’t fancy being responsible for damaging such ancient grounds. I read somewhere that the windmills are over 300 years old, though this was all on tourist sites, and I haven’t found hostorical literature to prove otherwise.

The spinning blades of the windmills are obviously not there, having rotted and disappeared many years ago. What’s left are these cylindrical stone buildings, about 20 feet tall and only about 10 feet in diameter. Some of them had wooden doors attached. Locals were using a few of them to store things in, such as roof tiles. Inside one of them looked like a modern day garage with a bench, shelves with an assortment of oils, paints and sprays and a few planks of wood with saw dust on the floor. Quite surreal, given the history of the landmarks. Other turrets had been turned into homes. One is an apartment for rent, another belongs to a local, and another is now a restaurant. Can you guess what it’s called? These conversions were all further down the hill, leaving the more exposed ones at the top to absorb time.

Walking around the ruins (still unsure if I was allowed to do so) there were clear signs this was a large working area in the past. There are a handful of smaller square buildings and many walls leading off at right angles. Anything up to twenty other buildings may have sat in and around the windmills themselves. I’d love to see what this place looked like in it’s prime. An architects dream, no doubt. And a true workman’s place.

Somebody mentioned that a body was buried up there. I can’t remember if they said a king, or a warrior or something of great significance. Either way, if it’s true, there wasn’t any signs or a plaque or anything giving such information. If you know of any such burial, do leave a comment. Thanks.

With my days being as short as I was making them, it was almost time for sunset. I pointed the camera toward the harbour and let it run till the battery ran out, one photo every 8 seconds. Two hours later, sun beaten and sweating, and several chapters deeper into my book, I headed home again.

Doing nothing, as such, isn’t in my nature. I’m always revving at top speed in first gear, moving from one project to the next. Relaxing and going with the wind is completely out of character for me. Though I was enjoying it. I still felt I should be exploring more, and with only a week left to go I enquired about boat trips and so forth. I had previously enquired about a days diving experience in Rhodes, but I didn’t get a reply.

So, another day, another few dollars spent. let’s see what Tuesday brings.

UPDATE: I have since discovered that the whole area up there is much bigger than I thought. Apparently there is a gun turret up there. And someone has kindly got involved in geocaching, hiding a small box with a log book inside, should anyone wish to find it and sign it. People leave items such as toy soldiers or coins, whereas others take objects to other geocache sites. The last person to log a find on the geocaching website was 6th August 2011. I may just do that tomorrow!