In brief: I was approached for possibly more than accommodation, rediscovered life in the fast lane, was surprised by a decent hotel and discovered Greek-style McDonalds.

After staying on the tranquil and relatively quiet island of Symi for 12 days, stepping off the catamaran in Rhodes was like being hit in the face with a brick. So many people, so much going on. Turning my phone on I worked out the route to the hotel, discovering it was well within walking distance. 20 euros saved. Strangely, as I manoeuvred myself through the crowds an older lady approached me and in perfect english asked if I was looking for a place to stay. But her expression said more than “stay”. Her eye contact stayed with me as she swung around, hand on hip, eyebrow raised. Perhaps my imagination, but that look was more suitably placed in the windows down the less-frequented red light alleyways of Amsterdam. “Already booked, thanks!”.

The crowds dissipated by the dozen as holidaymakers boarded tour-operated coaches. Others vanished into tiny cars who had waited to collect them. Remember the scene in The Incredibles, where Mr Incredible squeezes into his tiny car? That’s the sort of scene I witnessed. The rest of us made our way on foot into Rhodes New Town.

It really was a sensory wake-up. It had taken less than two weeks for me to forget about radio, television, music and news headlines. The closer to the town centre I got, the more these things returned. Rapidly. Coffee shops appeared on every corner flanked by rows and rows of designer stores. There was even an entire street with half a dozen shops dedicated to umbrellas. Just umbrellas. In a place where the temperature hasn’t dropped below 25 degrees, even through the night, fully stocked windows of brollies seems a bizarre idea.

Arriving at my destination I was pleasantly surprised. I was sticking to a budget and The Atlantis City Hotel was near enough the cheapest place I could find. I wasn’t expecting much. But inside was a world of marble and stone. The rooms were all newly refurbished with air conditioning, wifi, television, a balcony, shower and hair dryer. A touch of class. And their TripAdvisor 2012 Award on reception was some form of proof.

I dumped the bags and took a wander down a few streets before closing time. As much as most of these stores claimed to be “designer outlets”, I suggest otherwise. No legitimate outlet would hang expensive designer clothing outside without an owner keeping an eye. It was knock-off central. I’m surprised they get away with it. But who’s looking?

It wasn’t long before I discovered a McDonalds. Truth be told, if it were a KFC I’d have cried. At that moment, any fast food would do. Inside was a cavernous reception with a couple of disorganised queues. It wasn’t clear who had been served and who was waiting. Eventually I caught the big eyes of a young and excruciatingly excited member of staff. She took the order with a sense of urgency. Yet whomever was in the kitchen was seemingly playing the opposite game, as the expressions on the other customers suggested. I counted eight trays with receipts waiting. Some had bits of their order already there, burgers going cold. Like a bee in the summer the order-taking employee floated from tray to tray, checking to see what was missing, cheerfully noting out loud to herself. This McDonalds must have been down the other end on the spectrum of fast food. Twenty minutes later I got my burger and chips. I don’t know if they kill-to-order or not, but it sure felt like it.

Back in the hotel I skimmed through the 21 available channels. BBC World and EuroNews were the only English ones I could find. It seemed odd to be watching “UK Anti-Austerity Protests” from Greece when several times I’d sat in the studios of Sky News in East London watching the Greek protests and riots. A turning of the tables. Every other channel appeared to be yet another Greek current affairs show where several politicians sit in boxes shouting at each other through satellites. It’s a common sight in Greece: 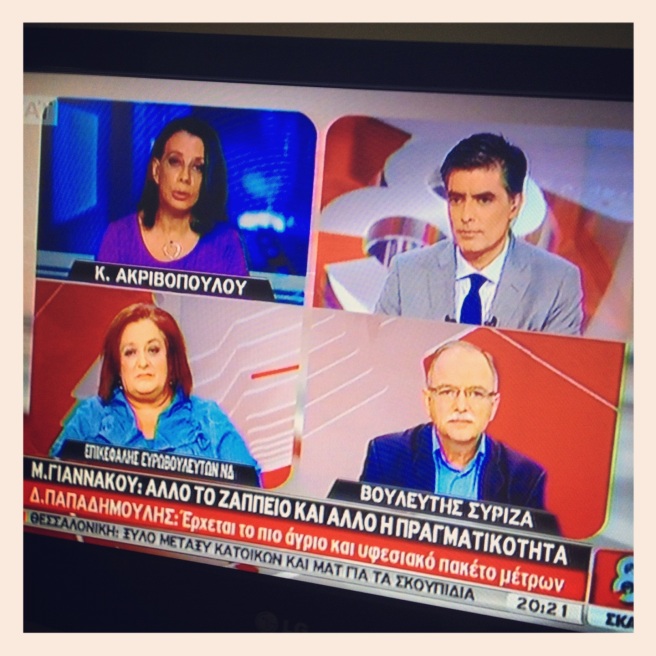 My reason for moving from Symi to Rhodes on Friday was for a diving experience day in Kalithea on Saturday morning. It would be an early start. So with tiredness in my bones I headed to bed, safer in the knowledge that there was probably a lesser chance of discovering a tarantula in my room. Unlike on Symi.