The following short is the reason I got into DSLR video. It’s a fantastic example of determination and skill. It shows, with a bit of time and patience, you can create something so awe inspiring it can stop people in their tracks for a few minutes… This is an edited, single-shot (not time-lapse) video of the moon rising over Mount Victoria Lookout in Wellington, New Zealand.. If only I could do something similar:

Here’s one of the finished interviews from the Horror-On-Sea Film Festival that I was invited to in January 2013. We shot seven interviews in total, and I’ll add them to this blog page as they come along.

In the first one Jason Wright of Silent Studios interviews MJ Dixon, director of “Slasher House“.

This weekend was long, but fantastic! Not content with working on Big Brother as a Reality Director, I also drove hundreds of miles between shifts to cover a unique event as a Camera Operator…

Friday was the start of the Horror-On-Sea Film Festival held in the south of Essex. The astounding Park Inn Palace Hotel was the venue for blood and gore, with independent film makers gathering to meet and show their features and shorts. Folks from all around the UK socialised and swapped details, whilst avoiding the zombies dressed in full make-up with blood dripping everywhere.

A few weeks ago I applied to an advert asking for those with DSLR kit to assist in filming interviews. Unbeknown to me at the time, the advert was posted by a company I’d already worked with in the past as an “extra” in one of their zombie features (The Undead Records). After a quick online chat I discovered I could only do one of the three days, but I’d assist fully where possible for sure on the Friday. I ended up returning on the Saturday too as someone else didn’t turn up. That’s one thing about me you can rely on; if I say I’ll be somewhere, then I will be!

On arrival I met up with Jason Wright, creative director of Silent Studios, who discussed the plan for the festival. I also met Dead Rotten (David), one of their fully zombie’d-up crew, and Chloe, one of their star Cosplay models who’s the Silent Studios star of their Lollipop Chainsaw feature. Friday was to be a quiet start to the festival with a few screenings with writers and directors giving a question-and-answer session, whom we’d then interview afterwards.

All my kit was put to good use that day. I used a Canon 550D on an Induro tripod for a wideshot and a Canon 5Dm2 on a Manfrotto 546B tripod kit and fluid head with a zoom lens to shoot singles. I also used the Sennheiser 835 handheld mic for guests to pass between themselves, with the Sennheiser G3-100-GB Diversity Receiver connected to the Zoom H1 for recording the audio. This was the first time I had to consider sound as part of the job. One thing I learned is to re-scan for a free audio channel rather than accept the first one, otherwise you still get some occasional interference.

The most difficult thing to contend with was light. The first interview was shot by the windows with natural light, but also with a daytime light setting inside the room. This looked great. However the room lighting changed as the evening progressed and the daylight vanished. This forced the use of a higher ISO setting on the cameras, which caused extra grain and noise to be visible. Unfortunately I have lenses designed for daylight photography and not low-light video. This will be rectified in the future when I put money towards “faster” lenses..

When the footage is edited and uploaded I’ll post links and update the blog.

And, just to finish off such a brilliant weekend, I was given an official Silent Studios crew t-shirt! 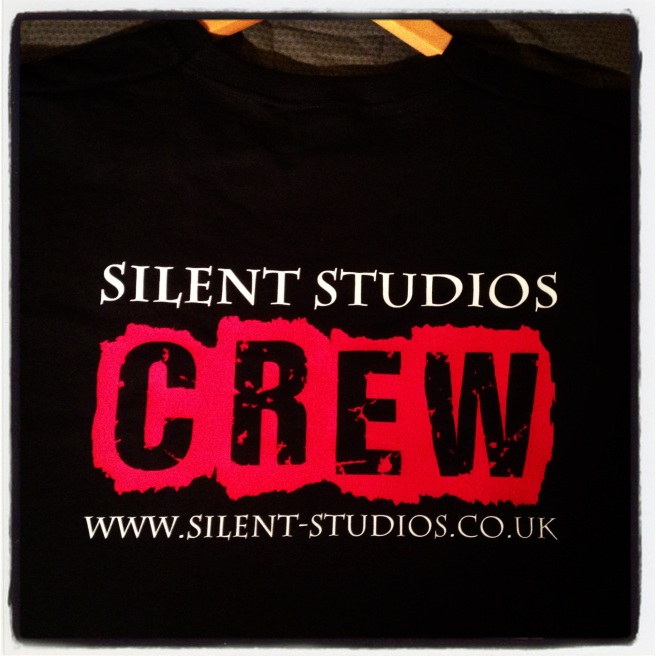