Not long ago I discussed “crowd funding”, where an idea is put forward to the world and through the support of small (or large) donations the idea can be fully funded and brought to fruition. One such idea was The Fitzroy; a feature length 1950’s style post-apocalyptic comedy based on a beached submarine hotel…

I supported this feature through Kickstarter, and also contacted the Producers separately to let them know I’d be happy to help with my time and any kit I own to help support the film further. They were kind enough to reply. And so on Friday I was tasked with filming behind-the-scenes during the creation of the movie soundtrack, courtesy of The Green Rock River Band. 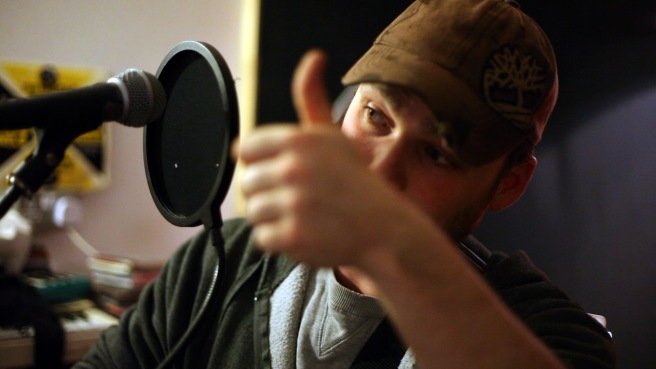 This band have a distinct character and sound, described on their own website as “doom folk“. I already had an idea of the style The Fitzroy might take, and these tracks simply bolster that vision. Yes, they’ve got bass, drums and guitars. But they’ve also got violins, banjos, a washboard and vocals unlike anything else you’ve heard.

I’d like to thank the band for their patience during their recording session. A special thanks goes to lead vocalist Jeremy Sachs for his splendid cups of tea. Thanks also to Chris Clarke at Reservoir Studios for letting me film at the location.