Jump to: What devices work with the HDCP stripper used in this blog?

High-bandwidth Digital Content Protection (also known as HDCP) is a form of digital copy protection to prevent copying of digital audio and video content as it travels across connections.

This means (in technical jargon) you cannot view, copy or record digital content from certain devices via HDMI if the receiving device is not HDCP compliant. If you attach an HDCP protected HDMI signal to a non-HDCP compliant device, the device will display a message along the lines of “your device cannot display this content”. In layman’s terms, if you plug it in and it doesn’t work you’ll see something like this:

Any device sending an HDMI signal does an EDID check with the device at the receiving end. The EDID check basically says yes or no to allowing the image to be displayed. This decision is based on circuitry built in to your device, which proves your display device has a licence to decrypt the signal.

One such device in the UK is a Sky+ digital box, or digibox. You therefore cannot plug in a Sky+ box via HDMI and record to a capture card, or BluRay Recorder or an external hard drive, for example. Although I understand the purpose of copyright and infringement, it seems its a grey area when it comes to HDCP, and it’s current usage. I’ve read that bypassing HDCP isn’t actually illegal and considering the code was “cracked” several years ago, it’s now also an entirely useless protocol anyway (although I know that doesn’t mean it’s alright to do it). Microsoft recognised the defunct nature of HDCP and stated that Xbox One games wouldn’t contain HDCP encryption (great news for those who love to record and share their favourite Call Of Duty head shots), although services such as NetFlix and DVD playback would require an HDCP compliant TV. The legality of HDCP was questioned over at www.hdfury.com. However, (although their page has since moved) the most important line of all the text on their page is was:

HDCP is not a law or mandate yet

If you were looking for a way to send HDCP-encoded HDMI signals to a non-HDCP device for viewing or recording, the following “splitter” box will do it:

The following steps work perfectly with this device: Plug the HDCP-encoded HDMI source into the Input of the HDMI Splitter box. Plug your non-HDCP compliant device into either Output 3 or 4 of the splitter. Low and behold, the HDCP check will be bypassed and the previously encoded signal will be sent to your device. This would, for example, allow you to record things from your Sky+ box to your BluRay recorder, or any HDMI recording device such as a Matrox Capture Card, an Atomos Ninja or HDMI DVR. I’ve read some HDCP “stripper” devices require you to connect your HDCP-compliant TV to one of the outputs, so that the circuitry can do a “handshake” with your TV first in order to get a yes from the EDID check. Only then would the unencrypted HDCP signal pass through to the splitter device. To be clear, the above device does NOT require that step. You can plug your non-HDCP compliant device into Output 3 or 4, and it works without the TV. Also notice the above device is not advertised as an HDCP “stripper”, although that’s exactly what it does. It seems Intel Corporation (the creators of HDCP who require viewing equipment to register and pay to use their special protocol) don’t like the word “stripper” or “remover”. 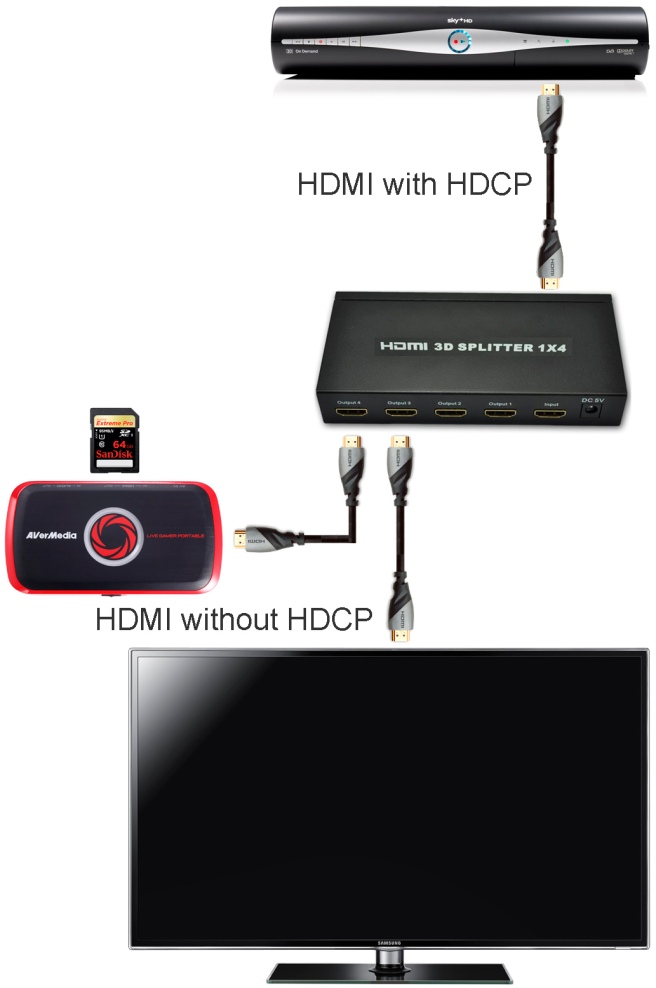 Confirmed HDCP Devices that WILL WORK with this HDCP stripper

If you know a device that works, leave a comment and I’ll add it to the list.

*Updated August 2013: This blog post was entirely re-written for the above device. The first blog version I wrote centred around the “Maxx Digital 1 To 2 HDMI Splitter”. Although that device could pass an HDCP encoded signal to a non-HDCP compliant device, it was discovered that it only happened on very rare occasion and wasn’t a permanent solution. It just so happened to pass my HDCP enabled signal from my Sky+ box into my Atomos Ninja during a test, on the very first occasion that I plugged it in. Further tests didn’t work. In the end I discovered that powering the Maxx Digital device on and off several times would occasionally cause the built-in EDID check to get confused, and therefore allowed the encrypted HDMI signal to pass through. It was literally one out of every 100 or so power cycles. Having contacted Maxx Digital directly for clarification to any particular steps I should have taken to make it a more permanent solution, I’ve heard nothing back. I have heard that using two “Maxx Digital 1 to 2 HDMI Splitters” back-to-back also works, but I can’t confirm that myself. Therefore I went to find a single device that works, and this is the update…* *Updated June 2014: TV Broadcasters around the world contacted me via this blog. Many have gone on to purchase the splitters in order to make it much easier for them to get previously HDCP protected content from one source to another. The splitter boxes are used in Edit Suites, Live Galleries and Satellite Trucks for TV transmission. Here’s an image I was sent of one broadcaster who bought dozens for their edit suites:

Please note I am in no way affiliated with any manufacturer or any eBay member who sells the above product. I’m simply pointing you in the direction of where you may be able to get one.