This blog talks about mining Bitcoins, and converting those Bitcoins into Litecoins.

What is a Bitcoin or Litecoin? Litecoin is the silver to Bitcoins gold, and is coming online as a potential legitimate currency (and potential successor). It’s suggested that Litecoin may become as profitable as it was to those who started early Bitcoin mining. In December 2013 the price of 1 Bitcoin soared above ONE THOUSAND DOLLARS. At time of writing Litecoin mining using average desktop computers is still possible but it amounts to cents and pennies (it’ll actually cost you more in electricity). However you can generate small amounts of Bitcoin and trade them for Litecoin and still hold a potentially profitable online currency, should Litecoin inflate in the same way that Bitcoin did. Click here to read more about what exactly Bitcoin and Litecoin is and how it works…

To jump to “Converting Bitcoin into Litecoin”, see the end of the blog. To read how to mine Bitcoin in the first place, read on.

What other digital currencies are around? Similar to Bitcoin and Litecoin, other SHA256 cryptocurrencies can be mined using devices such as a Red Fury USB miner. To see other types of currency, click here.

How To Mine Bitcoins if you own a PC or Mac

Download a program called “cgminer” from here: http://ck.kolivas.org/apps/cgminer/ . Red Fury / Blue Fury USB ASIC miners have been tested with version 3.10.0 on a Windows 8 system and 3.9.0 for Mac. If you have trouble finding a precompiled version for Mac, you can download the latest port from here: http://spaceman.ca/cgminer/

Cgminer works perfectly for Mac, however you can download an alternative called Asteroid: http://www.asteroidapp.com

With Bitcoins, you require a “wallet”. This is a place where any mined coins are sent and stored. Your wallet address is a long string of numbers and characters, and will look something like this:

You can create a Bitcoin wallet online here: http://blockchain.info/wallet , however, I highly recommend downloading the software application from http://bitcoin.org/en/download where you will store Bitcoins on your own computer. The software application needs to download a HUGE database of all the transactions that have already taken place (millions) and needs to update daily in order for your payments to appear. Initially, this database download can take a few days!

The benefit of using the software rather than an online wallet is that various online wallets have been hacked, and people have lost their Bitcoins. By storing your wallet on your own computer, your Bitcoins are safe.

Mining for Bitcoin is now at a point where purpose-built hardware has been designed to calculate (or hash out the answer) at a faster rate than your computer processor alone. These devices are called ASICs; Application-Specific Integrated Chips. These devices will hash for Bitcoin, and Bitcoin only (or similar crypto currency, based on SHA256).

You can buy ASIC miners on eBay, Amazon and a bunch of other places online. Be sure to buy from a trusted seller as some unscrupulous sites still exist where people will take your money (or your Bitcoins) and you’ll get nothing in return.

In my opinion, the best way to get into Bitcoin mining is to buy a multi-port USB hub and buy separate USB ASIC devices, and slowly build up your “farm” of hardware. You can have up to 127 USB devices connected to one USB port, although you’ll need a powered hub if you want to do that. That way you can spend smaller amounts of money on relatively fast USB devices at your own pace, instead of whacking a huge chunk of money in one go. But get in fast, as by the end of 2014 the difficulty rating will be so high that todays current hardware will mine next to nothing.

Once you have cgminer and a wallet you need to install a driver in order for cgminer to recognise your Red Fury / Blue Fury USB ASIC miner(s). Use software called “zadig”, which allows you to choose a driver for unsupported hardware and fool Windows into communicating with the device. You can download it free from here: http://zadig.akeo.ie

Alternatively, you can try drivers from here: http://minecoin.net/bluefuryredfury-driver-for-windows/ 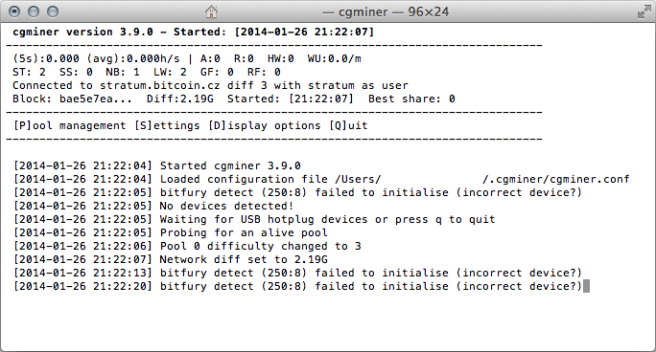 You can temporarily disable these drivers when your computer first starts. The drivers will re-enable when you restart your Mac. To disable the drivers, open Terminal and with the device plugged in, type:

You will be asked to type your password for the first one. The default drivers are now disabled. If you run cgminer and you still see the error message, simply unplug the USB hub/device and plug it back in again.

Alternatively, if you use the Asteroid software for Mac, these drivers will be disabled when the program runs and re-enabled when the software closes.

You also need to join a “pool”. A pool is a group of people who are all mining at the same time for the same Bitcoin reward. The difficulty rating of a single user generating a Bitcoin by themselves means it would literally take decades to find a block (find an answer). By pooling resources, multiple people can hash for the same Bitcoin, and split the reward when it is found.

I recommend you register with “Slush’s Pool” here: http://mining.bitcoin.cz which is one of the original pools when Bitcoin mining started. You can expect a Bitcoin payment every 12-18 hours. Alternatively I can recommend BTCGuild.com if you require smaller payments, but more regularly (almost hourly).

An alternative list of pools can be found here: https://en.bitcoin.it/wiki/Comparison_of_mining_pools

You now have the software, you know the hardware, the drivers required, got a wallet address via online or the software, and lastly you’ve joined a pool. Now to put it all together…

When you first run cgminer you will need to configure it. You’ll need your pool URL details, your pool username and pool password:

If you’ve joined another pool, your URL address will be similar to the above. Check the website you registered with for those details. Your username is the one you created when you joined the pool. The password is the same, although most pools don’t require a password, and you can just use anything you like.

Now that cgminer is configured you simply plug the Red Fury / Blue Fury / Ice Fury / Bi-Fury USB device into any USB port, cgminer recognises it and starts hashing. Any Bitcoins found as part of the pool will be sent to your Bitcoin wallet, as configured when you registered to join the pool.

BEWARE: Some pools require you to reach a minimum amount of Bitcoin before you can deposit into your own wallet. They may also charge a percentage fee. Take note of what these values are before you start using a pool. Some are better than others.

With everything running correctly, cgminer should look like this: 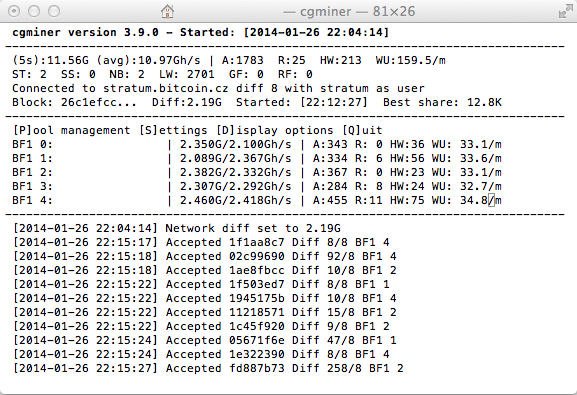 Now you only need to double-click cgminer and it’ll start hashing with your details as soon as it loads. You can also configure cgminer to have a “back-up” pool. So if your original pool fails for whatever reason (usually because the pool is down for maintenance), it will automatically switch to your back-up pool and won’t lose any mining time:

Now cgminer will switch to your back-up pool if your original pool fails. You can switch between them by going into the same menu (“P”).

If your bog standard computer isn’t fast enough to mine Litecoins directly, I recommend using your Bitcoin hardware instead. Generate smaller amounts (0.01 or more) and trade them. Use a website such as CEX.IO which allows you to openly trade your Bitcoin for other currency. You can mine for Litecoin on your own computer using software such as cgminer or Asteroid, but the amounts generated are truly tiny, unless you have expensive graphics cards.

Currently, you can trade 0.02 Bitcoins for 1 Litecoin.