Plans don’t seem to work. So, out of the blocks, new rules already applied. No rules were set, but a daily blog is likely out of the question, versus a weekly blog which feels like a lot of detail might be missed. Your best current option is therefore a simple sequential ‘update’ entry.

The last few blog posts were either about the trip, or the contents of the trip. At time of writing the trip has already begun. Heathrow to Hanoi (via Bangkok) Sorry about that. I truly intended to give you pre-flight updates of sort but to be honest the actual travel to Vietnam was relatively painless.

The first flight was fine. No other way to put it, really. As much as a long haul that it was (12 hrs), they provided plenty of entertainment in the form of movies, documentaries and soundtracks to keep me occupied. I planned to watch 4 movies (Boy Hood, Into The Storm, Transformers: Age Of Ultron and Guardians Of The Galaxy), though I ended up with just two, with high hopes of watching the others on the way home. With a spare seat between myself and a fellow passenger (who spoke only on take-off and landing, 12 hours apart) it was comfortable overall.

Second flight was more fruitful (Bangkok to Hanoi) It appeared the Captain required several “bunny hops” before actual takeoff, as we skipped along the runway. I envisioned headlines such as “plane explodes after runway error”, or “runway tragedy as jet liner explodes on takeoff”. We took off, flew, and landed unscathed. It is worth mentioning the fact that Vietnam Airlines rules seem to suggest the handing out of hot towels (which were actually cold) be done exactly at the point of departure. You know, when every other airline has their crew strapped in with instruction, VA appeared to attempt to get ahead of schedule instead. Comical. If not serious.

Flight food was great. Beef and noodles, or spicy fish, or rice and salad. I chose spicy fish on the VA flight, mainly because I thought she said “fizzy chips”. She actually said “fish and rice”. T’was tasty.

Accommodation was useful too. Cheap as chips at $5 a night. We’ve got used to comparing everything to prices in the UK or the USA. Seems utterly insane that a beer is 80p, a 3 course meal is £3 and a motorbike is £150.

Of things to note for the future, red bottles don’t necessarily mean tomato sauce. In Vietnam they more likely mean CHILLI sauce. For me, this does not bode well. Breakfast and lunch have been interesting so far. As have the trips to the loo. Say no more? 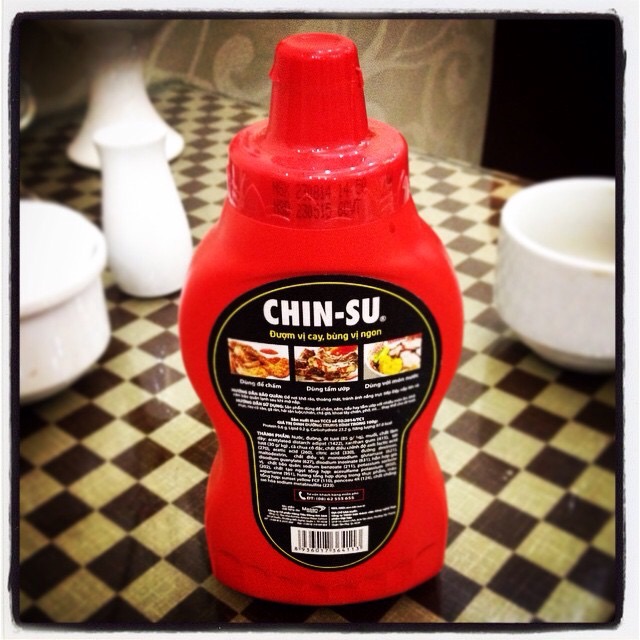 So within our first 2 days we’ve secured bikes from a local dealer, had a local garage service them both, trialled them on the local streets and prepared our first route for departure into the unknown. All without being arrested. Have I mentioned foreigners owning bikes is illegal?

So we’re ready to go!

Here’s my licence (probably owned by a thousand others previously)… 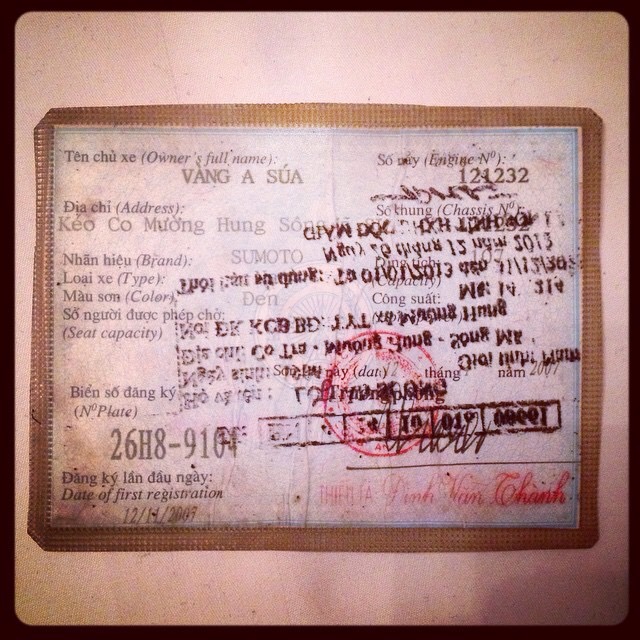 And here’s our choice of bikes; the Honda Win…