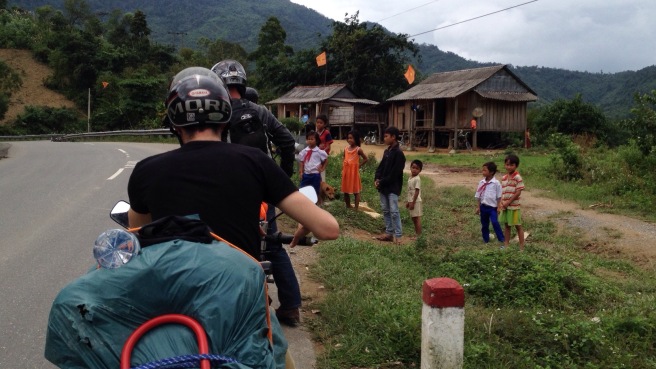 We planned to leave Dong Hoi the next day. This gave us the opportunity to take advantage of some sightseeing before we moved on. After all, that is why we came to Dong Hoi. It’s become apparent on this trip that although we had grand ideas of doing the tourist bit at each place, the journey itself became a chase to the next location. If we left too late in the morning we were chasing the light to stay safe. Or the weather would make it dangerous and slow us down. And regular breakdowns took away precious hours and days. My lack of confidence on a bike meant I was constantly slower than everyone else. And nothing (except experience) was going to change that. We also never really had time to stop after a really good road, ride back to set up a camera, do a pass for the holiday video, and return to pick it up again. Even with a month of time, it just wasn’t possible.

Back in Dong Hoi, a lovely guy from the Buffalo Hostel, Un, asked us if a girl could join us on our bike tour up to the Paradise Cave. The German girl, who’s nickname was “Z”, rode on the back of Clarence’s bike. The Ho Chi Minh Trail roads were wonderful. Much quieter, better quality, less dangerous. It was decided we’d take this road the whole way if we can, rather than the coastal roads (which were a death trap). It’s a stunning road, a hundred times better than the main roads.

Along with us were two Canadian dudes, Jackson and Ting, with whom Clarence had got chatting to the night before. Clarence works in Canada (Big Brother) and so we became friends and continued the trip as a group. Canadians, German, English and Scottish. Our newly formed Temporary International Biking Universal Language Association (TIBULA) rode westward toward the caves… (Took me half an hour to come up with that. It’s still shit).

We stopped off at The Dark Cave first, but that required a zip line to the other side of an island to get into the cave, which was an (“unavoidable”) additional fee. Or they would kayak you over. That’d cost us too. It was starting to sound like it’d be costly when all tallied up. So we stopped there for lunch only and then rode off to find the other cave instead.

Paradise Cave is huge. Theres no denying that. It’s likely the biggest cave I’ll ever be inside in my lifetime. What people don’t tell you is that it requires a near 6km hike up the side of a mountain to get to. Even though they’ve paved it in ramp style, it isn’t easy for a guy of my stature or stamina to get up there in one piece. That nearly killed me. And even getting to the hiking area is a trek. Once off the main road, the track is like a roller coaster with steep climbs and huge drops on the bikes. That went on for 15 minutes or so. When we got to the gate we were ushered over to buy a ticket to park our bikes. Turned out it wasn’t the main entrance and we could have parked anywhere, but we fell (yet again) for a local trick. Still, it was only 10’000VND (about 40p. Still cheaper than Ealing parking prices).

Inside the cave is lit with slippery wooden walkways, with platforms built around the most spectacular stalagmites. Waking down even more stairs, the temperature drops dramatically. And for a guy like me, out of breath and sweating his butt off, cold was not good. As Clarence pointed out we’d be walking back up those stairs at the end. If there was a walkway all the way through… Well, it wouldn’t be a “cave”. Spotlights reflect off perfectly calm pools of water, subtly lighting the cave in various patches. With no air movement (you can almost taste 1’000 years ago) the water pools are perfect mirrors. It’s an incredible sight to see nature left to its own devices, making such beautiful creations. The smells and dim lighting adds to the atmosphere. It’s like stepping back to the beginning of time.

I was shattered after the trip, so much so that I hit the sack just after dinner. There was no way I could be “sociable” in the state I was in. A fever was setting in.

The next morning the Canadians joined us on our attempt to the next place. It was a long trip, up to 220km. We needed the time and the light, but we left it a little too late. Although the HCM trail was almost perfect, we ran out of time at around 177km. The rain had also caught up with us and we were all pretty drenched right through. So we scrambled to the nearest hotel for the night. My lack of good health was taking a turn for the worse.

Driving in rain is no fun. The weather was awful. Even at lower speeds, raindrops hitting your face kinda stings. The sunglasses I had been wearing made it impossible to see when the cloud rolled in and it got dark. And the goggles that came with the helmet created a sort of tunnel-vision thanks to closing off my peripheral vision. Also. The rain just sticks to them and need constant wiping in order to see pot holes and rocks. Making matters worse was the occasional traffic jam. Some buses and coaches took this route, and every so often we’d come by a few cars honking like crazy to get past. None of them would give way to any bikers, so all we could do was slow down. Only on occasion could a batch of bikers creep by. This caused our group to divide on occasion, which makes it hard to keep an eye on each other and make sure nobody is having bike issues or an accident, etc.

The hotel we chose could have been the beginning of my stomach troubles. I classify my stomach as being one of iron. Normally I can eat anything and not have problems. Vietnam has broke through that iron cast. Now it’s made of candy floss, and I’m ill all the time. We ate a platter of food from this hotel, including fish. I’m convinced it was the fish that did it.

The next morning, stomach cramps in full swing, sweating but freezing, we rode on to Hue. With similar weather we trundled on through winding roads. For a biker these roads were amazing. Clarence was loving it, leaning into the corners where possible. I on the other hand was shitting myself, braking at every opportunity and slowing right down. I wasn’t loving it.

Then the rain started again. This time we stopped with enough distance between us and the clouds for us to get fully waterproofed up. It might have been wet, but it was still hot. Getting to the next place seemed to take forever.

After scraping past a few buses at a jam, Clarence shouted for us to stop. His front wheel was loose. He was watching the bolts undo themselves as he rode. Pretty darn dangerous. Then Jacksons checked his bike, and his was doing the same thing. I pointed out the change in sound my bike was making. And it turned out my rusted exhaust had snapped off. And to add to the mystery, Tings gear box seemed to be playing up and his second gear had gone all together.

Barely a single decent bike between us we carried on to Hue. The sun had set as we got off the main road. It was then when my chain started jumping off. The group were way ahead of me and I was left to fend off a group of school kids on bikes who were determined to test out their English.

The younger generation of Vietnam are so happy to say hello. From 5 years old to 18, anyone will say hello, ask where you are from, how old you are. I probably wasn’t the best person for them try out their skills. Soaked through, busted bike, lost team. I may have come across as grinning but slightly bitter about the whole thing.

Clarence came back for me. With his full face motocross helmet on, he didn’t hear me shout what the problem was. I felt I was frustrating the group just by being slow. That’s a genuine thing anyway, but also having a busted bike made matters worse. By then I had decided this trip was over for me…

The busy traffic was horrendous. All we could do was limp through town in 1st gear. Revving like crazy, the usual looks and smiles that passed us became confused faces.

I’m no biker. And I didn’t have the experience or the patience to keep going. Doing 70KPH downhill in the rain and attempting corners like its MotoGP wasn’t my thing. In reality I wasn’t looking around or seeing anything of Vietnam whilst on the bike because I was concentrating so much on the road ahead. Battered and bruised, my lower back in agony, feverish with stomach troubles. Two weeks in I wasn’t enjoying the experience of actually biking like everyone else was. Which was the point of the holiday.

If I was experienced and confident on a bike, things would have been different. But just passing a CBT in the UK wasn’t the qualification which gave me that. So as fun as it was, I wouldn’t be progressing further on a bike. Clarence suggested I should take the number plate as a memento, but I ended up selling the bike to a local delivery company. Seagal ( the name I gave my bike!) now delivers all the ice to the bars in Hue. And he got it for 1.5 million VND… £45.

So on the morning of Friday 28th, after the final supper (well, breakfast), the group split. One of the most depressing things in my life was hearing their bikes riding off into the rest of the journey, my back to them as I walked the other way. Their bikes were all fixed again (I’d suggest “patched up” as opposed to “fixed”) and they rode towards the roads that give spectacular views of the Hai Van Pass. I missed out, but I’m sure I’ll see the photos. I, on the other hand, walked back to the hotel and took the first taxi to the local airport. For £30 I could fly to Ho Chi Minh. And for £60 I was able to recover my flight originally booked for December. By the Saturday night I’d be home.