This blog is a ditty about my Mac failing and how Apple repaired it free of charge. Theres a section of unexpected problems here, which may be things you’ve encountered.

Last week my MacBook Pro decided to fail. In the middle of editing a video the screen displayed vertical lines and started showing blocks of noise. At first I thought it was the (less than a year old) Solid State Drive that was failing. A few seconds later the laptop reset itself, and then reset itself again without booting back up. Bad news.

All seemed fine when it eventually did boot up, that is until I opened Final Cut Pro to finish the edit I was working on. Bam, the screen went again. Very bad news. A quick online search brought me to an article by Mac World entitled “Graphics Failures finally addressed by Apple repair programme“. A page on the Apple website also confirmed this. Good news!

Turns out this was a known problem, and even though my MacBook Pro was three and a half years old, Apple would repair it free of charge as the fault was from a manufacturing defect (the lead-free solder on the AMD graphics chips, apparently).

The next problem was finding where to fix it. Using their online system, I chose HARDWARE, then MACBOOK PRO, then GRAPHICS. It popped up a map of all the Apple stores across the UK and by clicking on each one it’d show whether an appointment was available to visit the Genius Bar. Of course, every single one I clicked showed no appointments for a week. No appointments, across the whole of the UK, for a WEEK?! So I called the Support helpline. The lovely girl on the end ran me through some key combinations to reset the memory and reset other bits an bobs in the hope that somehow the MacBook Pro had just forgotten how to work itself. This obviously didn’t work, and she finally gave in and conceded the fault was likely the graphics card.

Apple Support did two things for me. The first was set a phone call for two days time, in which she guaranteed an appointment at a local Genius Bar. The second was to put me through directly to the nearest Apple Store and ask them to try squeeze me in somewhere. The White City Apple Store suggested I turn up at 10am the next day and they’d see what they could do regarding an appointment.

10am the next day. There are around THIRTY people standing outside the store, which hasn’t even opened yet. There’s a guy with an iPad searching through names and appointments to sort the gathering of people into orderly sensible lines. One for appointments booked, one for who needs appointment, one for just shoppers, etc. I’m filed into the “Needs Appointment” line.

You’d have thought it was the Christmas sales when those doors opened. People were RUNNING and pushing by each other to get in and to the Genius Bar. Quite insane. A calm and sensible young girl asked if she could help, and within a few minutes I was booked in! “We’ll take your mobile number and text you when to come back to the shop. It’ll be about half an hour, so feel free to wander the mall till then”. So that’s what I did.

Exactly half an hour later my phone beeps. My appointment is ready. Back at the Genius Bar my laptop was plugged into their network and a range of extensive diagnostics were run. I know most of the button combinations and ways to restart Macs, but I’d never seen this one before. The guy squinted at the screen as he recognised the fault. He confirmed it was the graphics card issue, and assured me that it’s a very rare occurrence. In fact they keep only 1 replacement Logic Board in stock for the off-chance that someone might come in for a repair. “In the 40 hours per week that I work, its incredibly rare to see this fault. And I’m not told to say that. I’m just being honest with you”. 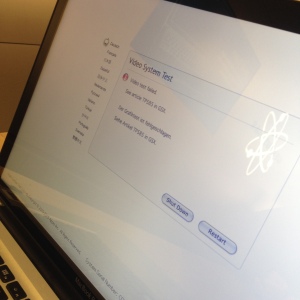 He snuck off to the stock room and came back with the replacement logic board literally held aloft in his hands. “We’ll get this swapped out. It could be three to five days. It could be a few hours. We’ll give you a call and keep you up to date”.

From acknowledging the issue was a manufacturing fault, to the step by step efforts by Telephone Support, to getting an appointment the same day… and it was REPAIRED the same day. I dropped it off at 11am. I collected it at 7pm.

Things To Check After a Repair!

Something which was out of their control, and something I didn’t expect to happen, was that my computer had somehow forgotten all my passwords and serial numbers for my software. I’ve no idea why that happened, as it’s the same Solid State Drive and RAM they put back in. It was the Logic Board they replaced (or motherboard if you’re a PC person). I have a feeling that somewhere along the lines your software is tied to your computer serial number, or something like that? If somebody knows, please pass it on!

Firstly, although it could see all the Wifi hotspots, it would not connect to any of them. “Connection Timeout” was the answer it kept giving. I had to manually go into the settings, delete the history of wifi connections, delete the Wifi out of Network Settings and reboot a couple of times. Eventually it re-connected.

Secondly, I opened Mail and it told me that my passwords were incorrect for ALL FOUR of my email accounts. Even when I manually typed them in and clicked OK it still returned saying INCORRECT PASSWORD. I had to go into the settings, disable the accounts, re-enable them and manually type the passwords into the account settings AND the outgoing SMTP server settings. In the case of my Google Accounts I had to use App Specific Passwords, which is a one-off password assigned to a single device for security purposes.

I also noticed that Find My Mac was disabled. This is a VERY BIG THING. You can re-enable Find My Mac by going into your iCloud settings and ticking the box. Realistically, this should be ON by default!

Then, when I connected my iPad to the Mac it told me it wasn’t registered with this device. I had to Authorise iTunes to work with my iPad. Same with my iPhone. So now I’m down to only 2 devices out of 5 devices I’m allowed to Authorise with iTunes. It then started a re-sync which lasted ALL DAY.

Lastly, there’s a function on Solid State Drives called TRIM. This function allowed your Mac to intelligently talk to the device and cuts down on rewrites. SSD’s have a shelf life, depending on how much data is read or written. If you write 10GB per day then it should last a hundred years. Apparently. Though I’ve used a piece of software which told me mine has a shelf life of 8 years left. I do definitely read and write more than 10GB per day, especially with video editing (for which you SHOULDN’T use SSDs for!). TRIM was disabled again, even though it was enabled when it went in for repair.

To enable TRIM on a Mac, check out the Cindori website which has software called TRIM Enabler where you can turn it on and off.