This blog post is my way of expressing more than 140 characters to those who’ve interacted with me regarding Big Brother on Twitter recently. I write it to inform and remind 🙂

I should also point you in the direction of my blog disclaimer, for your consideration.

My job at Big Brother is a technical one. I Direct the cameras within the House to cover people, areas, tasks, etc, to the best of my ability. What happens to that footage once it’s shot isn’t my remit. It disappears into the ether via fibre optic cables and the magic of electronics to other people in other places who do other things with it.

I’m a Director, not a Producer. I have no say over editorial decisions nor have influence over what can and cannot be done. I do my bit on Twitter to support the show completely off my own back, and at risk of being severely bollocked for it with the potential to not being asked back in the future. I don’t want this, and I’m sure you don’t either. This very blog post will be printed out and handed to my boss for consideration.

I appreciate people think I might be one who can flip a switch and turn any Live Feed on or off, or have control over when or how it’s shown, or indeed its contents, or have answers as to why it can’t be 24/7. This simply isn’t the case. I don’t have those answers. But as an original fan, I sometimes ask the same questions you do. If I was able to answer them, I would.

As much as people think “Rubbish. You work for the company so you can do something”, let me give you an analogy:

The guy at the printing press isn’t responsible for the headlines of a newspaper.

I appreciate people reach out to whomever they can for answers, and I understand peoples thoughts. But I can’t answer questions if I don’t have the answer. I’m not in those circles.

Don’t get me wrong. I read all messages I receive, and I genuinely appreciate (most of) them. I try to respond if I can, where appropriate, in a way that’s appropriate. I’m a fan of the show at the end of the day, and I care about it just as much as you do.

I’m a fan of “Crowd Funding”. If someone is passionate enough about an idea, it’s possible to bypass corporate red tape and make that idea come to life with the help of others. Websites such as Kickstarter and IndieGoGo allow people to show off their ideas and have people contribute money towards their project. And if the crowd-sourced contributions hit an amount set for the project within an allotted time, they get the money and the project goes ahead. As a way of getting people involved, some projects give something back to their contributors such as a finalised item, a limited edition version of their project, a signed copy of a DVD, etc. It’s a great idea.

“Why would you want to do this?”, some may ask. My answer is simple; we are an incredibly creative bunch, and not everyone gets their chance to shine. I’m a firm believer in giving people a helping hand if I feel it’s likely to give them a positive outcome.

I’ve backed a few projects in the last year, all of which I thought were worthwhile as standalone ideas. Furthermore I looked at the potential these folks had and the impact their projects might have on their future. I’ve backed a photographer looking to showcase his stunning images, a software team creating a fantastical futuristic arcade racing game, and a technology company who want to get people active with their stylish button-sized activity monitor (who were looking for $100k and ended up with over half a million!).

One project I missed out on was a feature film called Least Among Saints by Marty Papazian, a feature length portrayal on the life of an injured soldier who moves next door to a single mother. It went on to become an award winning feature shown around the world. As an independent filmmaker Papazian wrote, directed and starred in it. He now has a solid future ahead of him, something I wish I had been part of.

My latest discovery is a UK based team looking to fund an independent film. Writer and director Andrew Harmer, producer James Heath and Liam Garvo of Dresden Pictures have put together a winning press package which deserves attention. Their Kickstarter project, The Fitzroy, is a feature length 1950’s style post-apocalyptic comedy based on a beached submarine being used as a hotel; The Fitzroy Hotel. That idea alone was enough to get me wanting more! Having seen the artwork on their Kickstarter video and the detail of their website and blog it’s a no-brainer for me to have pledged something to their project. At the time of writing this blog they had 246 backers and 65% of their goal funding (£39’403) with 10 days to go.

I truly hope they make it. 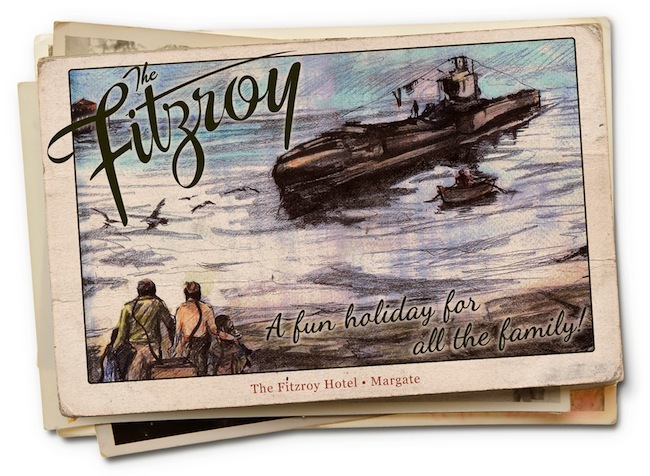 I mentioned before about their “press package”, and it’s something worth mentioning separately. Gaining exposure is essential in such a venture, and what these guys have done is create a team of people skilled in what they do and a detailed and enticing way of getting people involved. They have a regularly updated blog of the project, they keep in touch with their backers, they have a well designed website, and the perks they offer in return for targeted pledges is something I haven’t seen before. Fancy a download of the movie, or maybe a physical blu-ray version? How about your name in the credits and an invite to the premiere screening? Maybe a gas mask prop from the feature? What about a post-apocalypse survival kit? Or, how about becoming an animated character as part of the opening titles? These are all brilliant ideas to which other projects should take note.

As a side-line to their feature idea, and the reason I initially found the project, they created and uploaded a short film called “Choke Mate”. Although based on the world of The Fitzroy, where earth is engulfed in a poisonous gas, they state that the result is somewhat of a darker world. What got me interested is that they took ideas and suggestions from their supporters and in just over 48 hours turned around and uploaded their creation.

Stellar work, worth applauding. And funding…

If you feel like you’d like to donate something towards their goal, you can contribute to the project by clicking here. In the meantime, here’s the team’s over-the-weekend short entitled “Choke Mate”:

As an update to this blog, I’ve since discovered some other work from Andrew Harmer. This comedy short is also worth a watch: